If you are like me, I am always looking for some more scale points. Here is a simple and easy way to get some using what you most likely already have laying around on your work bench. These make great inexpensive giveaway prizes at your next competition. To create these all you will need is some red and black wire, solder and your soldering iron. 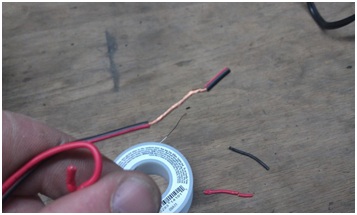 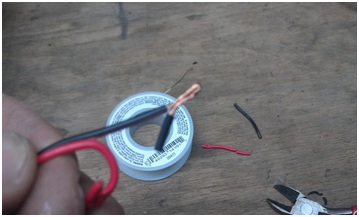 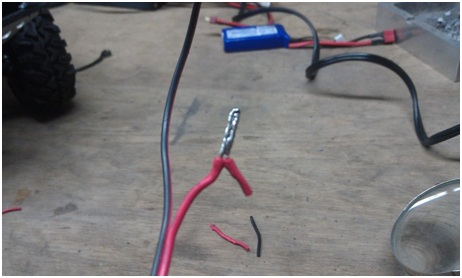 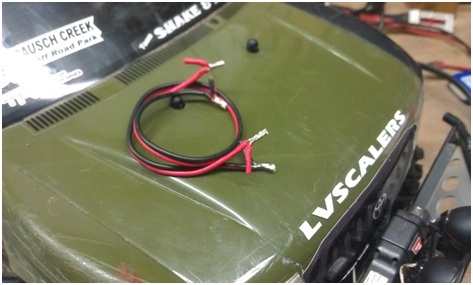 If you are one of the many scalers that would rather run a hard body than a Lexan body and got their hands on the original or rerelease of the New Bright JK. However you don’t want to cut up the interior and body to make it fit on your SCX10, here is your solution. You will need to mirror and flip the tranz. When you do this simple procedure it will put the spur gear right behind the cup holders and in the void of the seat backs of the driver and passenger. I did this when I first converted my SCX10 Honcho to my New Bright JK hard body and have been very pleased with it. I feel that this change also helps with body roll under acceleration and a bit of torque twist is removed. Here are the steps for this procedure.

This is what it will look like in stock positioning.

I have inserted arrows in the pictures to orientate the front of the truck. 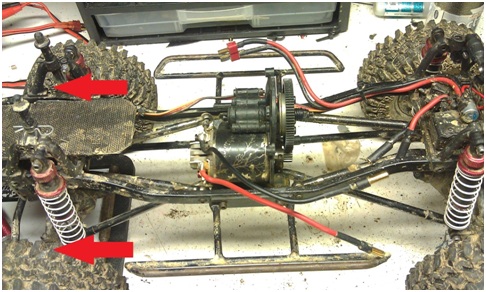 The skid plate without the transmission installed. 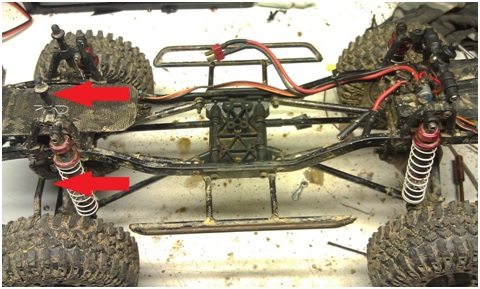 Now that the transmission is out undo the upper and lower links and sliders and flip the skid plate 180*. It will look like this afterwards. 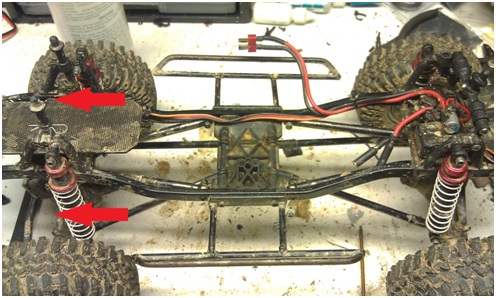 Note the mounting holes for the transmission are now on the driver side of the truck.

Now you can move on to the dis-assembly of the transmission. The next few pictures show more closely what the transmission will look like without the slipper and motor installed. 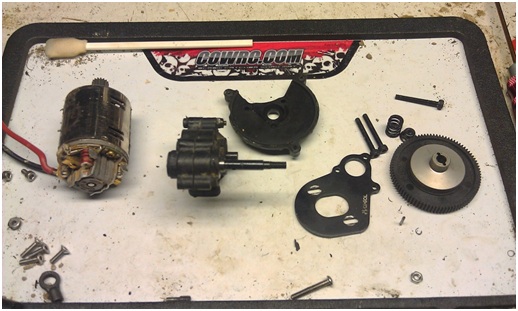 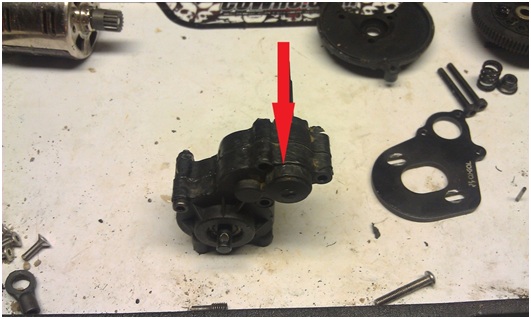 This is what it will look like before removal of the plug. This is just the transmission cases split apart as they were in the truck to begin with. Note the hole in the left half is for the stock position of the slipper shaft and the above mentioned plug is behind the bearing in the right half. 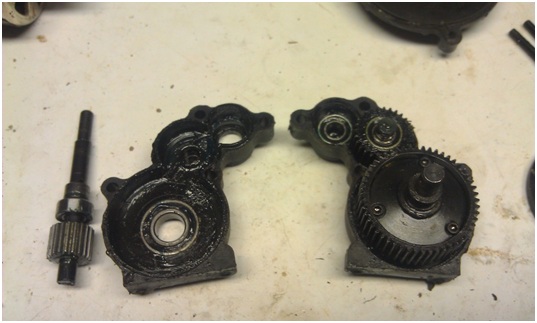 Now take the two halves of the transmission apart and swap out gears from one half to the other. The transmission case half opposite of the stock slipper position has a plastic plug that needs to be removed to do this. 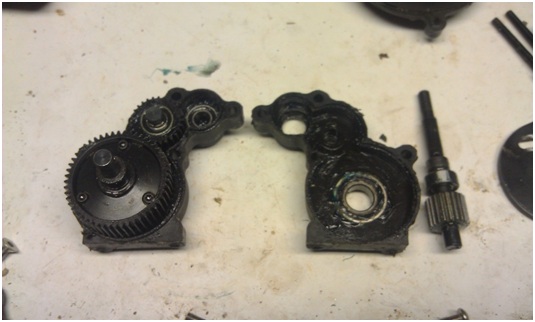 Once the two halves are put back together it should look like this. Now the slipper shaft is exiting the opposite side of the transmission. 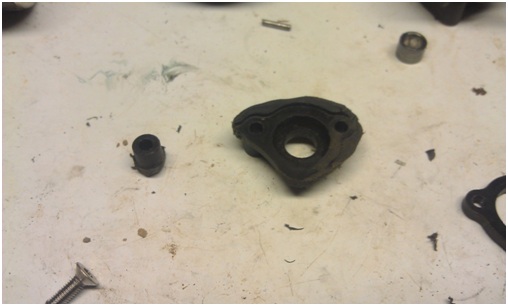 Make sure this is flush with the housing before assembly. 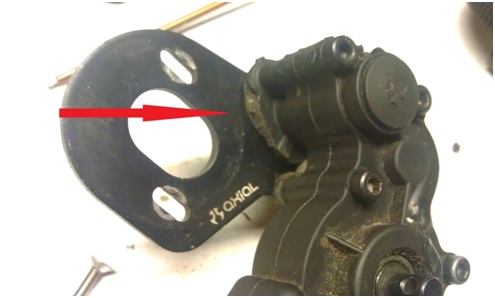 It may take some trimming, cutting and shaving of the plastic in different areas to get it to fit without binding against the slipper shaft. The motor plate does not need any modification. Just a simple flip and it fits right on.

Now re-assembly can be started. After getting everything bolted together making sure it all spins free, set the gear mesh and re install it in the truck. 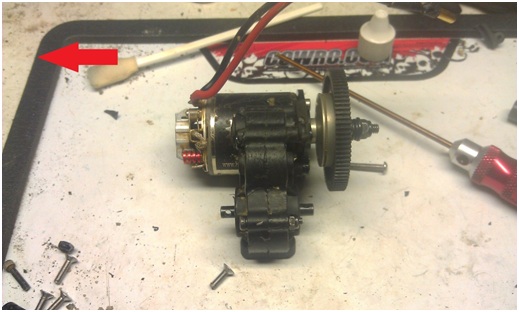 This is what it will look like when all finished. Take note that now the motor is on the passenger side of the truck, yet still in front of the transmission. The motor will not need wired in reverse as it is still turning the spur in the same direction.

Let’s face it the stock MRC drive shafts just don’t hold up to any serious amount of abuse. I really like my MIP shafts on my 1.9 Comp rig, but the wheelbase of my Class 1 was too long for the MIP shafts. I really wanted to use the MIP. Looking around I had a spare set of MIP’s and some of the new Axial Wildboar drive shafts. Taking them both apart I used the MIP section that went over the MRC output on the tranz and with a little light sanding of the CVD male end and the wildboar socket I was able to join them together to make a strong, light, reliable driveshaft for my MRC based Class 1. I ran them the entire season 12 comps with no issues and took 1st place in the club I belong to. Below are some pics. Enjoy.

Here is the photobucket link if you are interested. 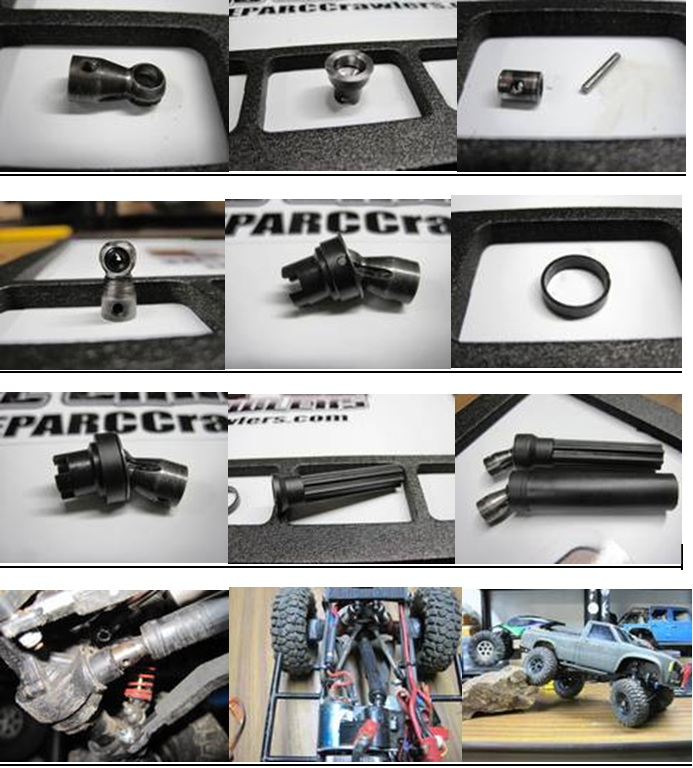